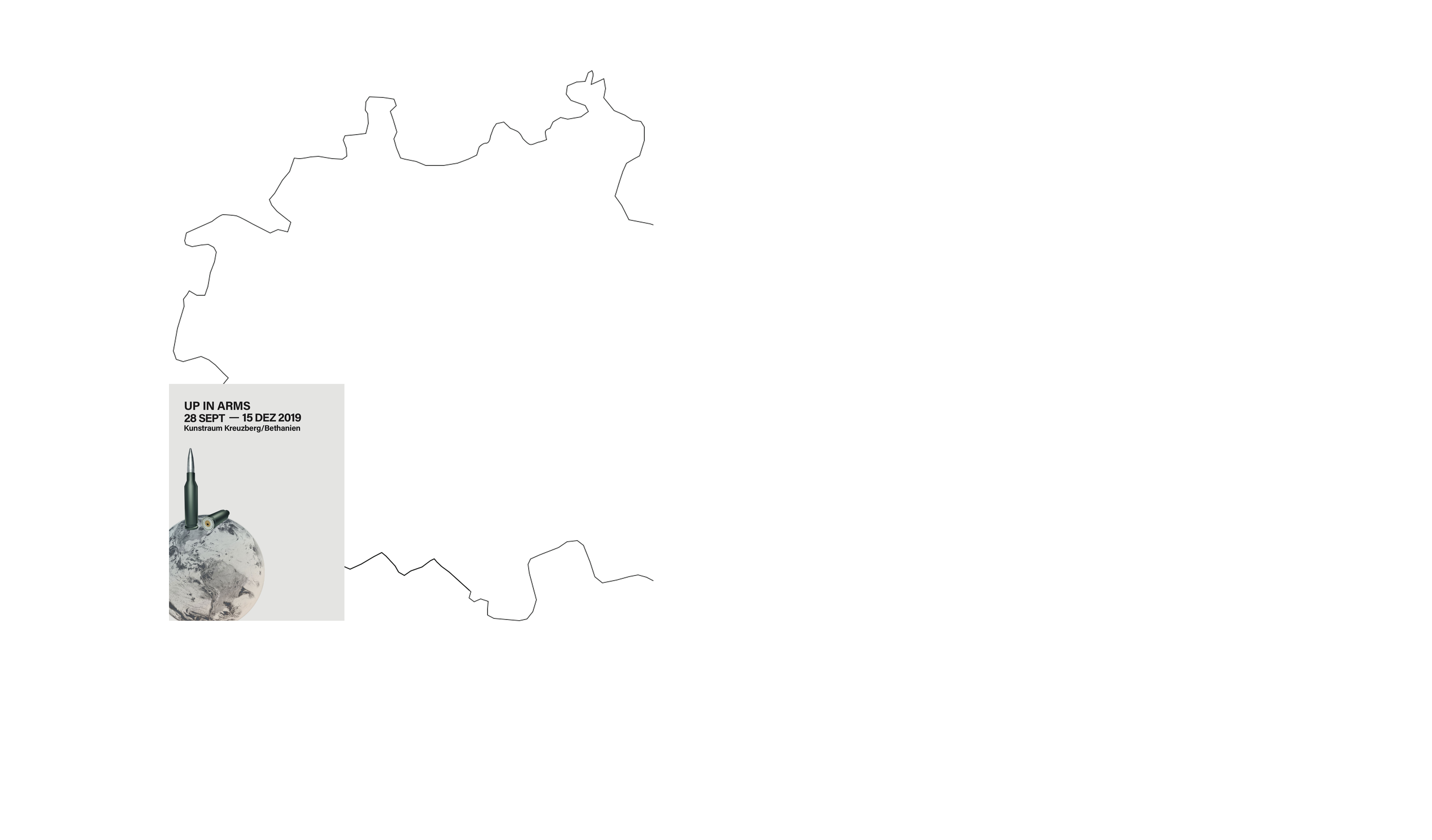 The first associations, which might come to mind when hearing the project project title »Up in Arms«, may go in two different directions. First, the “pointing with the finger as a gun and saying hands up” game of childhood on one side, and then the actual meaning of the expression – “to be very angry and/or vigorously protesting about something” – on the other. Yet they might not be so disconnected after all, because surely there are enough things to be angry about and protest against, especially if considering the arms trade. Since 2002 the global trade in weapons has increased by more than fifty percent, and with Germany being among the top 5 exporters of major weapon systems1, this deadly business is one we all are unknowingly profiting from2.

Protest takes many forms and not all of them consist of marching in streets. Art can also be seen as a way of protesting, and exhibitions, in this sense, a kind of public demonstration. The works of art thus themselves can become an oppositional action. »Up in Arms« seeks to fulfill this potential of art. With John Heartfield as a point of departure, whose political posters are a crucial example of how art can be used as weapon of protest, this art exhibition will put focus on the mechanisms of global weapons trade and its consequences. A crucial impetus for the project is also to make visible the links between the global arms trade and our local landscape precisely because no one can protest without first knowing what is going on.


Through the art works presented at the exhibition, the historical and contemporary conditions as well as the dimensions (and ambivalences) of the weapons trade’s economic structures are made tangible. It is especially the connection between art, the art world, the arms industry and personal experiences of being affected by different parts of this industry, which shall be highlighted. As the works make clear, this industry cannot be judged solely on its profitability or its meaning for diplomacy, as the stakes are too high to be framed through such narrow lenses.


The way art itself can be used as a weapon of protest against the arms trade is also central for the competition »Art in the Underground«, which takes place parallel to the »Up in Arms« exhibition. This year’s edition of »Art in the Underground« maps out and visualizes the presence of the industry in Berlin by placing artworks close to central sites of the arms industry, both historical and contemporary. In order to better link specific works with broader information on those both involved in or working against the weapons trade an online map supports the physical map. The exhibitions’ accompanying public program focuses and explores other aspects of the trade in weapons, taking such forms as panel debates with artists and the collaboration partners, film screenings, and guided tours of Berlin. A series of guided tours developed together with the civil initiative LobbyControl connect with the »Art in the Underground« commissions to give a look into the intersection between lobby-ism and the weapons trade. Further, a series of research articles is published over the course of the exhibition on the »Up in Arms« website.