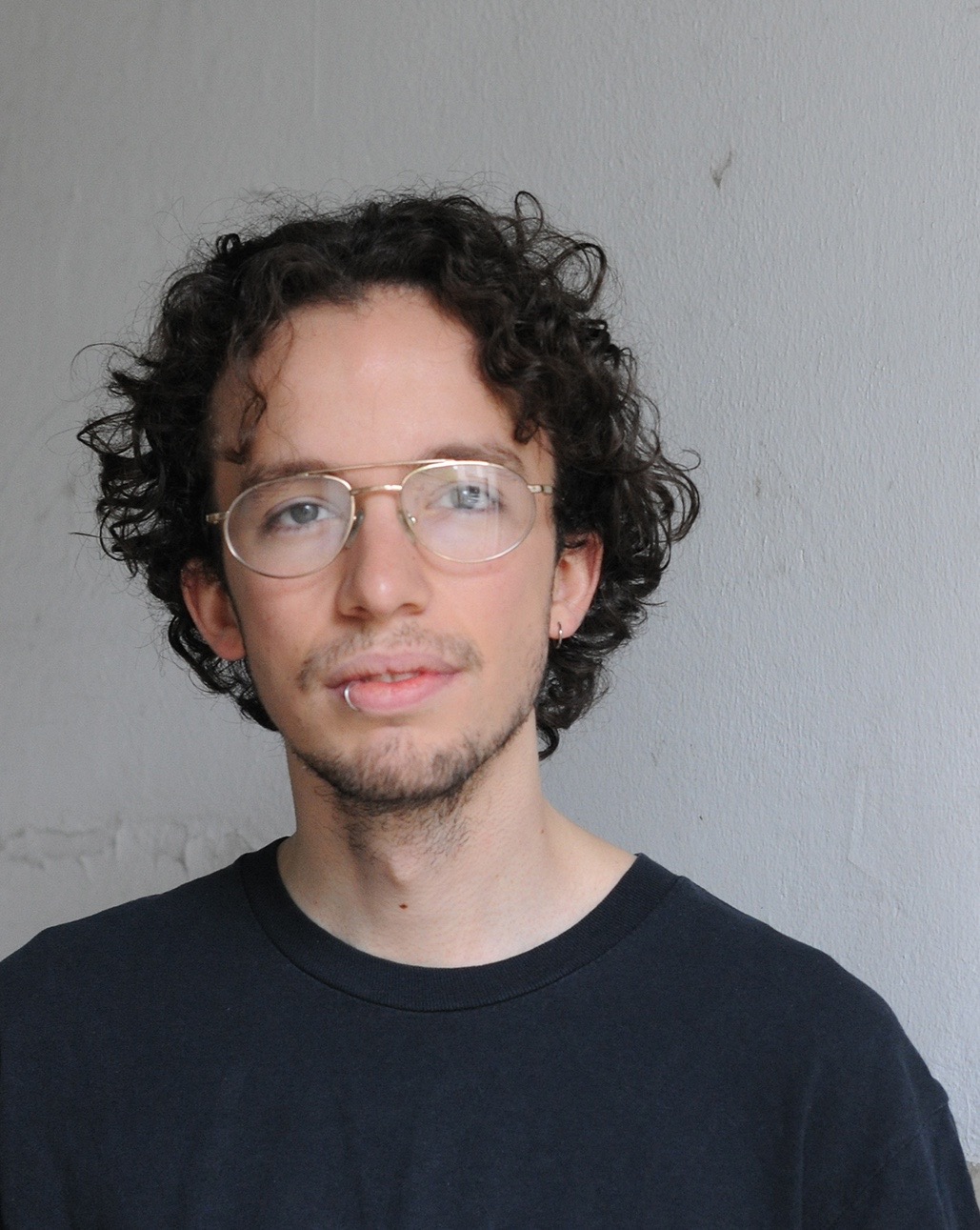 Sebastián Eduard [Dávila] is beginning his PhD-project with the title “The decolonial turn in contemporary art practices and terminology in postwar Guatemala. An art history of delinking” at the Leuphana Universität Lüneburg. He has published articles and interviews for the artistic platform ¡n[urgênçias (Berlin) as well as for Lateinamerika Nachrichten (Berlin) and Academia CCII (Mexico City).

Arms export and import can be envisaged as a global network comprising producers, consumers, users, opponents, and not least victims. The artists involved in the UP IN ARMS exhibition adopt positions within this network but also immeasurably broaden its scope by adding more localities and perspectives. In performances, drawings, installations, sculptures, and video works, they highlight the arms trade in Germany and other arms-exporting countries and so put their finger on the wounds inflicted by this industrial sector. For in countries such as Iraq and Guatemala, legally or illegally acquired weapons are currently being used to kill civilians in official or unofficial conflicts. The artists thus intervene in a landscape shaped by the asymmetrical power relations between the Global North’s “modern” nation states, companies, organizations, subjects/bodies and the Global South; and they thereby translate political/activist interventions into artistic practice. In other words: they show that art is capable of incorporating forms of resistance and protest, and also may itself take this form.

The “Hands Up!” of the exhibition title can be read as a more or less ludic command, one generally accompanied by the gesture of making a pistol with one’s hand. This “handgun” is an everyday performance used to hold up anyone caught red-handed. It is not unlike the expression I use above to describe an artistic strategy: “putting [one’s] finger on the wounds.” In both cases, “Hands Up!” and “putting [one’s] finger on the wounds,” the artists take on an active gestural, demonstrative, or interventionist role. But the targets of their gestures, demonstrations, or interventions are extremely diverse.
Certain artists visit arms trade fairs, in Europe or other places, in order to photograph or sketch businesspeople engaged in selling, buying, or admiring weapons of destruction. The artists participate thus in a spectacle of what might be called controlled violence: for in a sense, the violence here is on hold or at a standstill. For events such as the Internationale Luft- und Raumfahrtausstellung [ILA: Innovation and Leadership in Aerospace] in Berlin or the Defence and Security Equipment International in London are accompanied, of course, by massive security precautions, just like any other major trade fair in cities of the Global North. It is unthinkable that the lethal exhibits there might be put to immediate use. Divorced thus from their real purpose, the tanks, rifles, and grenades can be admired as aesthetic and seemingly abstract “wonders of technology.” This level of abstraction is rooted in the premise that arms guarantee security, as well as in the Global North’s faith – unshaken despite the growing fear of (terrorist) attacks – that the world is currently at peace. This potential to perceive death machines at a standstill as aesthetic objects provokes many artists to modify them in ways that allow for radical reinterpretations; and they succeed thus in making visible in their work the aesthetically charged spectacle of mass murder.


Constantine Zlatev’s glass sculptures in the form of firearm bullets are only one example of how a weapon may be translated into an art object and its original (lethal) purpose thus be revoked. This artistic disarmament strategy constitutes a very particular form of critique.
Other art projects, such as video works or performance, offer a tangible experience of the consequences of the arms industry for subjects/bodies in so-called regions of conflict in the Global South. The prospects of people in struggle, in grief, and injured, perhaps fatally, by gunfire may be diametrically opposed to those of the arms dealers, lobbyists, and politicians in Berlin or London; and yet they mutually determine one another. For the decisions taken at trade fairs in the Global North have concrete consequences for subjects/bodies in the Global South. On the one hand killing machines are admired as aesthetic objects; on the other they are hoisted onto someone’s shoulders, held in someone’s hands, and used in combat; and they leave their mark on the bodies of those they wound and maim. Likewise the very production of weapons needs to be read in more material/physical terms, than the observation and calculation required for the trade fairs. As different as these prospects and the attendant (everyday) performances may be they are very much a part of an industry that deals not only in money but also in human lives.


Regina José Galindo has, for example, several times herself personified – or had others personify – the prospects both of the victims and the users of weapons in Guatemala and elsewhere. Over the last year she realized two performances: Esmerilado [Polished] and Carguen con sus muertos [Carry Your Dead]. For Esmerilado, in cooperation with the artist Jorge De León, she so forcefully polished a handgun acquired on Guatemala’s black market as to erase all traces of its embossed registration number and brand name. The otherwise everyday practice of polishing a gun, once taken to its extreme, made it impossible to know the provenance of a weapon that was ready to be put to use. For Carguen con sus muertos the artist had various people carry her in a body bag through the streets of New York. In calling on people to carry all of the people killed to date, the artist highlights that the USA bears partial responsibility for the countless victims in the history of Guatemala, from the time of the civil war through to the present tightening of border controls by Donald Trump and his allies. With this artistic/activist intervention in public space the artist enables people of the Global North to enter directly into contact with the material consequences of its arms industry for the Global South. More precisely: the artist compels us to feel the force of this contact – and to critically confront it.

I have described the arms industry as an asymmetric network that on the one hand facilitates potentially infinite relations – everyone can participate in a (neo)liberal economy – yet that on the other is clearly divided in two by the line running between the exporting and the importing countries, between the consumers and users of weapons and their victims. This geopolitical and epistemic dividing line or rift is, in my view, to be taken as a symptom of that which Boaventura De Sousa Santos has described as “abyssal thinking underlying Western modernity and its colonialist constitution.”1 This thinking, says the author, creates a division between the Global North and the Global South that must be identified not only in geopolitical but also in epistemological terms. Thus also within the metropolises of the Global North, minorities and their forms of knowledge are banished to the other side – to the South2 – and in this way are rendered illegitimate or even invisible. Nevertheless, the subjects of the South feel all the effects of those practices based on the principles of western modernity, very especially so at the material/physical level. De Sousa Santos therefore writes, for example, about the murder of civilians in the name of their defense, and about the destruction of their way of life in the name of development. Thus security, defense, and development are concepts that are experienced, epistemologically and materially, by the subjects/bodies in the conflict regions of the South. Moreover, as may be argued in light of theories of decoloniality, they are part of the “rhetoric of modernity” and this, along with “the logic of coloniality,” must be imagined as two sides of the same coin: each can be regarded in isolation yet they determine and depend on each other.3 This dynamic between rhetoric and logic is not limited to “international” participation or intervention in armed conflicts up to the present day – for it is deeply inscribed also in the cultural and political practices and institutions of the formally colonizing or colonized countries. Coloniality accordingly encompasses far more than a spatially and temporally limited (concept of) colonialism. In light of the discrepancies between the principles of modernity and their colonial practices and effects, it is possible, firstly, to take a more nuanced view of international involvement in war and, secondly, to regard the modernity/coloniality project itself as a permanent war; and as a project that strives, moreover, “to conceal its war-like character by not even allowing its status to be named or questioned by those who are in the receiving end of its constant violence,” as Nelson Maldonado-Torres wrote.4 Victims of the arms industry can likewise be regarded in this sense as recipients of violence.

Weapons are killing machines that not only sustain the arms industry’s asymmetric network of producers, consumers, users, opponents, and victims, but are also caught up in the modern/colonial structure of war and in the war-like structure of modernity/coloniality. Weapons are the material/physical linchpin that interconnects all the different actors in the network. The artists adopt different positions within, or on the sidelines of, the arms industry. For example, they take the aesthetic of the arms dealers’ trade fair spectacle to its extreme (Zlatev); or they reproduce the position of a recipient of the arms industry, which is to say, that of a dead person (Galindo). They become actors or indeed activists who, firstly, put their fingers in the wounds of the users and victims of arms and, secondly, take aim at producers, consumers, and lobbyists with a gesture modeled on a handgun. In unison with activists who are fighting back against the arms industry, the artists also take aim at the recipients of their art projects in Berlin. For with its command “Hands Up!” the group UP IN ARMS challenges its audience in the Global North, which benefits at least indirectly from the arms trade, to take a good look at the – allow me to add, epistemological and material/physical – consequences. Moreover, the exhibition compels them to do so – and also to deal accordingly.