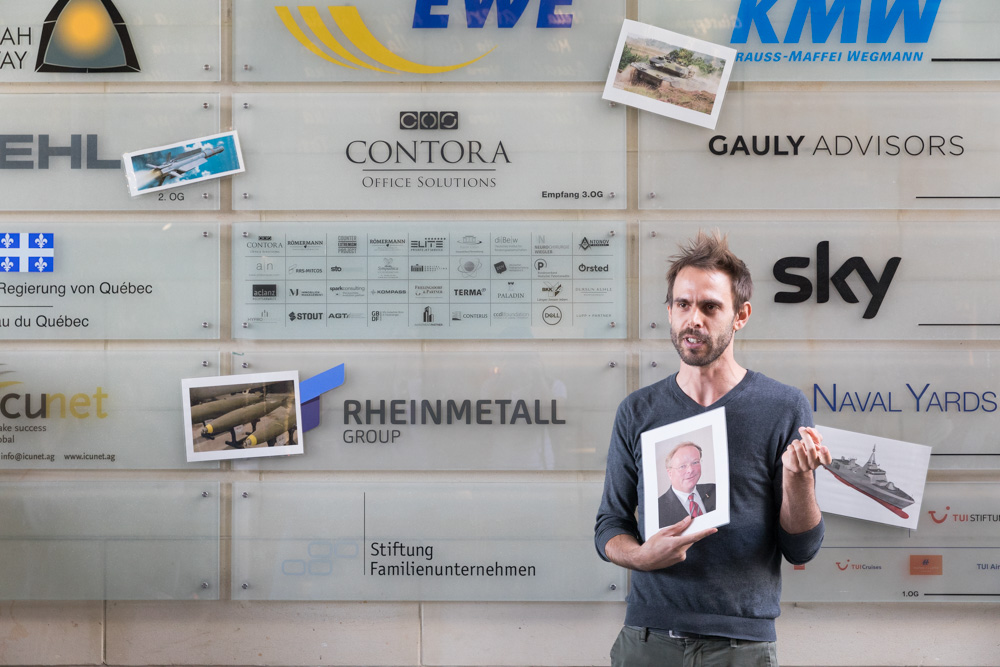 Martin Jähnert has been a lobby-critical city guide at LobbyControl since 2015 and has been responsible for the organization of over 300 tours and works for the LobbyScouts team since 2016. Before working for LobbyControl, he studied Traffic Planning and Future Studies in Berlin.
LobbyControl is a civil society, non-profit initiative that highlights the power structures and the political influence strategies in Germany and the EU. Seeking to promote a transparent and living democracy both in Germany and on a European level and to push for political changes, LobbyControl provides information on lobbying, PR campaigns and think-tanks. This is done through city tours critically pointing out how lobbyism works. Hereby is the lobbyism of the arms industry an important example. The initiative is member of the European Alliance for Lobbying Transparency and Ethics Regulation (ALTER-EU).

The Brandenburg Gate on Pariser Platz in Berlin is a historical site that tourists visit as they would a museum. This is where German emperors used to stage huge victory marches, to impress their subjects after winning a war: it was the backdrop for a show of power and might. Nowadays visitors stroll peacefully across the square, shooting thousands of selfies, day after day.

But Pariser Platz is still the setting for much talk about war – and about weapons. The arms industry has secured the top addresses in town for its headquarters. Today, it is not so much the military history of the site but rather its central location in the government district and immediate proximity to the Bundestag (German parliament), which appeal to this economic sector. The German arms manufacturing companies Rheinmetall, Diehl, and Krauss-Maffei Wegmann have chic offices on Pariser Platz, in which mainly lobbyists ply their trade.

The arms industry’s ladies and (clear majority of) gentlemen wear smart suits when sealing the deals of tomorrow. The details of such deals are hammered out in the government district: in the Bundestag, which gives its approval to military operations and determines the defense budget; and in the Bundeskabinett, (Federal Cabinet) on whose approval and permits the arms exporters depend.

Towering above Pariser Platz are the inconspicuous offices of all the vocal advocates of bombs, tanks, and machine guns: not only the arms manufacturers themselves, but also the representatives of their business associations, lobby agencies, defense contractor networks, and financial backers – from here, they keep a watchful eye on Berlin’s political machine.

Here we find Dirk Niebel for example, who was Minister for Development Aid from 2009 to 2013. In this capacity, he sat on the Bundessicherheitsrat (Federal Security Council), which decided that Rheinmetall should be allowed to export to Algeria not only individual tanks but nothing less than an entire tank factory. Rheinmetall was given the hotly coveted approval and Dirk Niebel got something too, in 2015 — namely a new job with Rheinmetall.1 And his insider knowledge of the federal government is very useful to him in this role as the tank manufacturer’s new chief lobbyist. Switching sides, as this is called, assures the arms industry privileged access to the political sphere. True, the arms industry has to reach deep into its pockets in such cases, but this is small change compared to the turnover it can expect to reap. Human rights and peace initiatives, by contrast, do not have the financial means to win politicians over to their side.

And Dirk Niebel is just one among the many politicians whose (political) career is closely tied up with the arms industry’s interests. Bundestag Member for the Christian Democratic Union (CDU), Volker Kauder is a vocal advocate of the arms industry and part of a profitable network. In 2010 Heckler & Koch donated 10,000 EUR to his constituency office then shortly afterwards asked whether he could support the company in obtaining licenses for arms exports to Mexico.2 Volker Kauder has always campaigned hard on behalf of Heckler & Koch,3 and the latter’s donations too have never ceased to flow over the years.4

Niebel and Kauder are just the most famous personifications of close links between politics and the arms industry, the consequences of which are always far-reaching. German companies sell bombs to Saudi Arabia, for example,5 and these bombs are dropped not only on positions of the adversarial Huthi militia but also, since 2015, on over 200 schools and other civilian targets.6
This lobbyism with lethal consequences all over the world far too often takes place out of the public eye and without any critical debate. For exactly how lobbyism works, and exactly who is paying how much money to whom in an effort to influence elected policymakers on the arms industry’s behalf is, in Berlin largely non-transparent. Hardly anyone sees and documents what is really going on in this sector.

We, members of LobbyControl intend to change that by raising public awareness of the world of arms industry lobbyists. Join us on a guided tour of the government district for a critical look at lobbyism. We will point out to you where the lobbyists work and what we can do to oppose them. LobbyControl exposes the role and activities of players in the arms industry lobby and, in cooperation with Up In Arms, uses artistic initiatives to put them in the public eye and bring them to public account.